Encephalitis is defined as a disease process that involves cerebral inflammation causing neurological dysfunction of any degree1. Over a hundred different microorganisms can cause infectious encephalitis, including viruses, bacteria, fungi, and even parasites2. It should be highlighted that the prevalence of infectious encephalitis of certain etiologies varies from one geographical region to the next. Therefore, the knowledge both of regional epidemiology and recent patient travel history can contribute to diagnosis. Interestingly, even using state of the art diagnostic methods, the etiology of a significant number of cases remains undetermined3.

In noninfectious encephalitis, significant advances in the characterization of autoimmune causes have allowed the identification of new autoantibodies and their antigens4. This subtype of encephalitis may show identical clinical presentation to infectious forms, but treatment differs radically, and a favorable response can be observed with immunosuppressive therapy, underscoring the need for a swift and correct identification of the etiology.

The aim of the present study was to provide a detailed description of causes, clinical presentations, demographic characteristics, diagnostic approximation and prognosis of encephalitis, in a neurological center in Buenos Aires, Argentina. In addition, we aimed to assess whether any particular aspect of the initial clinical presentation, or of the general approach to patient management, helped to predict etiology and/or case prognosis.

Medical records of all patients 18 years or older with presumptive diagnosis of encephalitis admitted between July 1, 2006 and July 1, 2013 were reviewed. The terms “encephalitis” and/or “meningoencephalitis” were identified in admission forms and case files of adult inpatient charts during the above mentioned period. In addition, symptoms that could be associated with encephalitis (such as seizures, sensory impairment and focal neurological deficit) were subjected to double cross-referencing on every admission record corresponding to this time period, in order to avoid selection bias.

Encephalitis was defined following the diagnostic criteria proposed in the “Consensus Statement of the International Encephalitis Consortium” in 2013, as altered mental status (altered level of consciousness or personality change) lasting more than 24 hours, with no identified alternative cause; associated with 3 or more of the following: fever, seizures, focal neurological signs, cerebrospinal fluid (CSF) white blood cell (WBC) count > 5/μl and suggestive magnetic resonance imaging (MRI) or electroencephalogram (EEG) findings. When meningeal signs were present, it was regarded as meningoencephalitis.

Data extracted from medical records belonging to 19 635 patients admitted in the study period were reviewed (Fig. 1). The initial search was made to include every patient 18 years of age or older admitted to the Neurology Department with probable diagnosis of encephalitis or meningoencephalitis, defined clinically as described above.

Eight hundred and fifty patients presenting neurological deficit not due to cerebrovascular disease, demyelinating disease, tumors or seizures, were included and their medical histories reviewed. Patients with meningitis and no CNS compromise were excluded. Only those with definitive diagnosis of encephalitis or meningoencephalitis were analyzed. This information was compared to results from an electronic search in our institute’s database of every discharge form in which the terms “encephalitis” or “meningoencephalitis” were reported as definitive diagnosis. Finally, one hundred and five patients met our inclusion criteria.

Brain MRIs were reviewed, considering hyper intense lesions on T2 and FLAIR sequence images, associated (or not) with areas of bleeding and perilesional edema, as compatible pathological changes5. It is worthy of note that certain etiologies presented characteristic distribution of lesions (temporal lobe in herpetic encephalitis or mesial temporal lobes in limbic encephalitis). In addition, contrast-enhanced images were considered to be compatible with encephalitis after ruling out other potential causes such as demyelinating diseases or brain tumors.

On EEG analysis, not only were electroencephalographic seizures considered pathological, but also paroxysmal or focal alterations (epileptogenic waves), or presence of considerable disturbances in baseline recordings (non-epileptogenic waves).

For prognostic evaluation, we selected the modified Rankin Scale (mRS), used in cerebrovascular disease. Patients with no sequelae were scored 0-1, with increasing scores assigned as degree of disability progressed, for a maximum of 6 points.

Differences between etiologies as well as in clinical, radiological and demographic variables were investigated using Fisher´s exact test and Kruskal Wallis test followed by Dunn’s multiple comparison test. Factors associated with infectious or noninfectious origin were addressed using multivariable logistic regression. Every variable with a p < 0.25 in the univariate analysis was included, stepwise, in a final model, calculating odds ratio (OR) and 95% confidence interval (CI).

The present research protocol was submitted to and approved by the institutional Ethics Committee and have therefore been performed in accordance with the ethical standards laid down in the 1964 Declaration of Helsinki and its later amendments.

One hundred and five patients met inclusion criteria, 64 (61%) men, median age of 48 years, with no significant differences between genders regarding age-related distribution. Demographic, clinical, radiological and electroencephalographic features are summarized in Table 1. 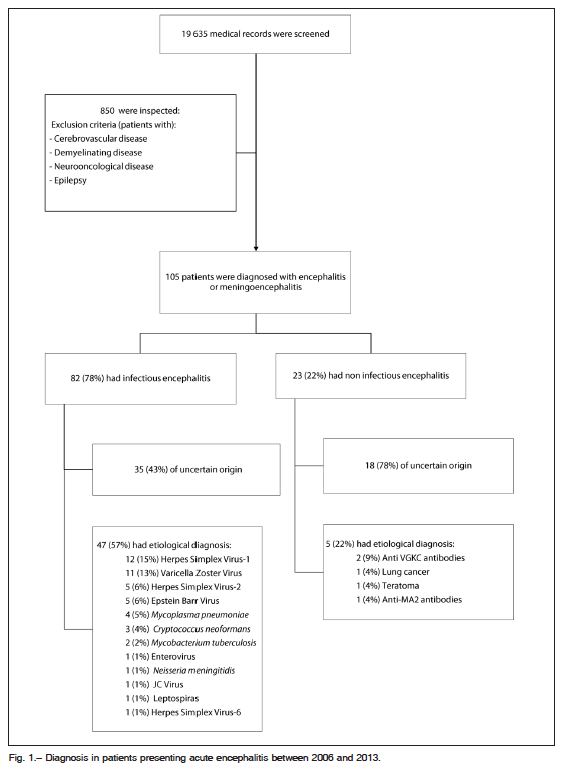 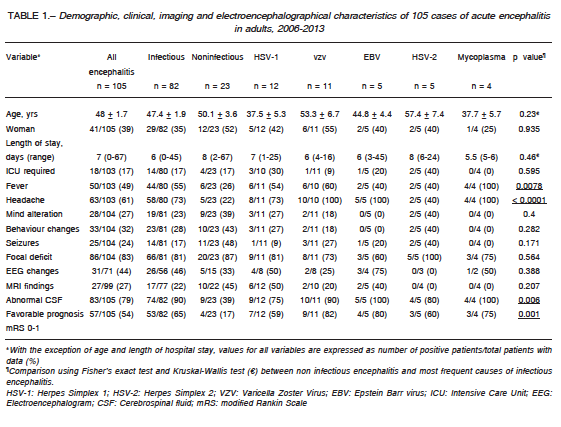 In 35/82 (43%) of the infectious cases, a specific causal agent could not be determined (negative PCR, cultures and/or serology). Patients with unknown etiology within this group were considered to have an infectious origin as a result of the analysis of the clinical presentation, workup (CSF, Serum, MRI and EEG) and outcome after receiving antiviral or antibiotic treatment. The percentage of patients in whom the etiology could not be determined remained constant throughout the study period (data not shown).

Twenty-three patients (23/105, 22% of the series) had noninfectious encephalitis; the mean age was 50 years and 11 (48%) were males. In this subcategory, 4/23 (17%) patients required admission to the intensive care unit (ICU). A total of 20 cases corresponded to probable autoimmune origin, while the remaining 3 were paraneoplastic.

Clinical presentation of this subgroup was dominated by seizures, behavioral changes and altered state of awareness (see Table 1). During workup, only 5/15 (33%) presented abnormalities in the EEG, while 10/22 (45%) presented typical brain MRI changes and 14/23 (61%) had normal CSF biochemistry.

All patients with noninfectious encephalitis had negative results on viral and bacterial PCR in CSF samples, as well as negative CSF bacterial, fungal and mycobacterial cultures. Immunologic tests were performed (both in serum and CSF), obtaining positive results in 3/23 cases (13%): 2 patients with potassium channel autoantibodies in both serum and CSF, and one patient with anti Ma-2 antibodies in serum only. Multislice computerize tomography (CT) imaging of the neck, chest, abdomen and pelvis was also performed (with both oral and IV contrast), and positive findings were found in 2 cases (lung cancer and teratoma).

In 18/23 (78%) of cases of noninfectious encephalitis, no causal agent could be identified, a proportion that has remained unchanged throughout the study period (data 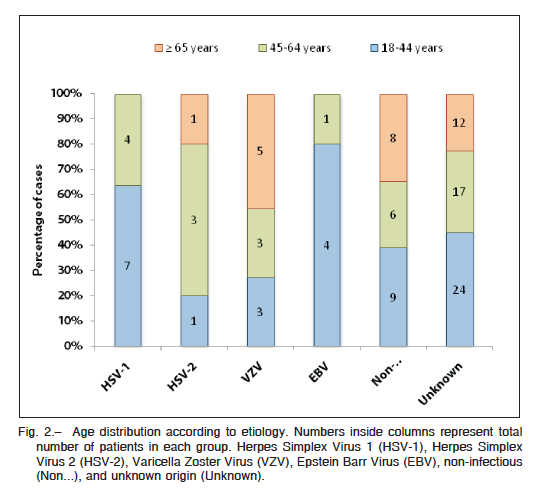 not shown). Following the same algorithm as in infectious encephalitis, those patients with unknown causal agent in this group were regarded as having a noninfectious origin as they presented a compatible presentation, brain MRI and/or EEG, response to immunosuppressant treatment, and the clinical picture could not be better explained by an infectious origin.

Statistical analysis was completed with a multivariate logistic regression of abnormal CSF parameters, to see whether they could help to predict a specific etiology. We observed that an increase in CSF protein concentration increased the likelihood of infectious etiology 12.3 times (95% CI 2.9-51.7), while the presence of pleocytosis did so 7.4 times (95% CI 2-27). A mRS > 1 on admission increased need for ICU care (95% CI 1.45-4.64) (Table 3).

The clinical involvement of the central nervous system during infections or autoimmune disorders constitutes a true medical emergency, making early diagnosis and prompt treatment key factors to improve patient outcomes. On the other hand, despite all diagnostic efforts and the application of multiple currently available tests, the causal agents often remain undetermined.

The predominant etiologies (both determined and undetermined) vary greatly from region to region3, 6. Prior knowledge on potential agents is fundamental to orient diagnostic efforts and start early treatment, in particular in settings with limited resources. In Latin America, information regarding prevalence of different etiologies (both

infectious and noninfectious) is sorely lacking, and was the main reason for conducting the present study.

In our study, 78% of the patients presented infectious encephalitis, while the remaining 22% corresponded to either autoimmune or paraneoplastic disorders. Among infectious cases, the great majority responded to viral origin. Different tests recommended by the European Federation of Neurological Societies (EFNS) were used for standard workup in these patients: lumbar puncture (recommendation 2A), serologic assessment (2B), CSF PCR (recommendation 1A), EEG (3C) and brain MRI (2B) 6, 7. The etiology remained undetermined in 43% of the infectious cases, a result consistent with most series reported from other parts of the world3, 8, 9.

Regarding encephalitis of known infectious origin, the microorganisms diagnosed most often in our population were (in descending order): HSV-1, VZV, HSV-2 and EBV. Age had an impact in the specific microorganism: EBV and HSV-1 were more common in young patients. This may relate to the epidemiology of both infections and future studies are required to address its significance. Our results correlate with those published in other studies, in which it has been clearly established that the microorganisms listed are not geographically bound10. In England, for example, a prospective study showed that the microorganisms most frequently identified were HSV-1, VZV and M. tuberculosis, while 37% had unknown causes3. The analysis of the surveillance for viral encephalitis and meningitis in Europe9 showed that the proportion of cases of unknown etiology ranged from 30 to 80%, while the cases of known pathogen differed from country to country. The most frequent pathogens associated with viral meningitis/encephalitis were: VZV, HSV and enteroviruses in Finland; HSV, VZV, EBV and mumps virus in the UK; borrelia, enteroviruses, HSV and VZV in Germany; HSV, VZV, EBV, and HSV-6 in France, to mention some. Of note, we were unable to test for several viruses that are known to cause encephalitis and are present in our country, such as St. Louis encephalitis, a flavivirus known to have produced encephalitis outbreaks in our area11. Noticeably, we did not detect HIV infection or significant immunosuppression among our infectious cases that could favor disease progression and/or predispose to certain microorganisms.

Significant advances have been made in recent years in the understanding of noninfectious encephalitis. The clinical presentation can often be indistinguishable from that of infectious cases, and both entities mighty even share some underlying pathophysiologic mechanisms12, 13. Still, treatments are radically different making early identification of causal agent important in order to offer therapeutic advantages. If we compare our methodology with that presented in European or North American studies, it can be observed that they managed to minimize the numbers of undetermined case by applying a much broader serological battery. A multicenter study performed by Ambrose et al. reported a decrease of almost 20% in patients with encephalitis of unknown cause as a result of applying these methods8.

The California Encephalitis Project concluded that, although the cause of encephalitis may remain undetermined in most cases, recognition of particular clinical profiles prevalent among patients with the disease may help focus efforts towards early recognition of etiology, pathogenesis, as well as evolution and management of this syndrome14. Our study has endeavored to determine whether certain clinical, laboratory (CSF analysis), imaging (MRI) or functional (EEG) pattern, might predict etiology, in order to accelerate diagnostic interpretation in the future, and consequently improve prognosis through early treatment. Of note, we found that CSF analysis can provide with early clues to differentiate between infectious and noninfectious causes: having raised concentrations of proteins or cells in CSF increases the chance of having encephalitis of infectious origin. Thus, a normal CSF in a patient presenting with encephalitis (in particular several days after onset) should raise suspicion of an autoimmune or paraneoplastic origin. Early treatment in these cases can have a significant impact on recovery and risk of permanent sequelae.

This study’s retrospective design yields an obvious limitation, as it does not allow for any ad hoc analysis. Furthermore, the development of new methods for studying these patients has increased in recent years, as there are now more diagnostic tests available.