Abstract Infections are frequent complications of kidney transplants. We aimed at determining the frequency and type of infections that occur in renal transplant recipients during the early (0-1 month), intermediate (1-6 months) and late (6-12 months) post-transplant period and analyzing the risk factors for infection. To this aim, we conducted a retrospective cohort study on 1-year post-transplant follow-up in two third-level university hospitals in Cordoba city. All consecutive recipients of renal transplants performed between 2009 and 2015 were included, except those with multiple solid organ transplantation and pediatric patients. We included 375 recipients, of which 235 (62.7%) had at least one episode of infection during follow-up. There were 504 episodes of infection, of which 131 (26%) occurred in the early, 272 (53.9%) in the intermediate, and 101 (20.1%) in the late post-transplant period. The most frequent infections in all periods were caused by bacteria (mainly urinary tract infections), and the most frequent viral infection was caused by Cytomegalovirus (mainly in the second and third period). In the multivariate analysis, infection risk factors were: age > 60 years (adjusted odds ratio [aOR] = 1.92; 95% CI = 1.05-3.49), organ transplantation from deceased donor (aOR = 8.19; 95% CI = 2.32-28.9), use of pigtail catheter for urinary tract drainage (aOR = 4.06; 95% CI = 1.27-12.9), and number of days in hospital after transplant (aOR = 1.05; 95% CI = 1.01-1.11). In conclusion, infections in renal transplant recipients represent a very frequent health problem in our hospitals. Understanding the local epidemiology of infection and the potential risk factors for infection acquires utmost importance.

Contribution of the article to current knowledge
• In two third-level university hospitals in Cordoba city, the most frequent infections during the first year posttransplantation affected mainly the urinary tract and were caused by bacteria.
• Infection risk factors were age > 60 years, organ transplantation from a deceased donor, use of pigtail catheter for urinary tract drainage, and number of days in hospital after transplant.

A retrospective study was carried out in two third-level university hospitals in Córdoba city, Argentina: Hospital Raúl Ángel Ferreyra and Hospital Privado Universitario de Córdoba. All patients aged 18 and older who received a single kidney transplant between January 2009 and December 2015, and who attended their follow-up visits at those hospitals were included. Patients under 18 years of age and those who had received another solid organ transplant during the same period were excluded.
All transplanted patients received immunosuppressive treatment and infection prophylaxis according to the Nephrology Department protocol. Patients with a high immunological risk received anti-thymocyte serum induction therapy (1.5 mg/kg/ day for 5 days), or basiliximab (2 doses of 20 mg) and human gamma globulin (2 doses of 2 g/kg) as an alternative regimen for subjects who were at a higher risk of developing serious infections and cancer. Patients with a high risk of delayed graft function and low immunological risk received basiliximab (same dosage). In addition, all patients received a methylprednisolone pulse therapy for 3 days. Calcineurin inhibitors (preferably tacrolimus), an anti-proliferative agent (preferably mycophenolate), and prednisone were used for maintenance therapy, except for a few special situations. All patients received antibiotic prophylaxis to prevent infection of the surgical site in the immediate post-surgery period, trimethoprim/sulfamethoxazole for one year, valganciclovir for 3 months (subjects who had received anti-thymocyte serum or subjects with negative CMV IgG results before transplant), or acyclovir for an indefinite period (all other patients), and nystatin during the first stage of the transplant. All patients who received an organ from donors with positive serology for syphilis (VDRL test) were given penicillin G benzathine (2 400 000 U). All subjects were tested for CMV, BK virus (BKV) and Chagas’ disease, with a monthly PCR determination up to 6 months. After transplantation, patients attended periodical follow-up controls which enabled the recording of significant events in their medical histories.
The medical history of each patient included in the study was reviewed, and demographics, comorbidities, transplantrelated information, and data about infections developed during the post-transplant period were collected. A distinction was made between standard criteria donors and expanded criteria donors (patients > 59 year or donors aged 50-59 who complied with at least two of the following three criteria: cerebrovascular accident as cause of death, history of hypertension and preablation serum creatinine level > 1.5 mg/dl) 9. Patient follow-up was carried out until one-year post-transplant, until patients underwent a new solid organ transplantation, or until patient death or loss to follow-up, whichever occurred first. The definitions used are found in the supplementary material.
The study was approved by the Hospital ethical review board.
Continuous variables were expressed as mean and standard deviation, and were compared with the Student’s t-test or the Mann- Whitney U test, according to their homogeneity.
Categorical variables were expressed as frequency and percentage, and were compared using the chi-square test or the Fisher’s exact test, according to the expected frequencies.
Statistical significance was defined as a p value < 0.05. Relative risk with 95% confidence interval was used to assess the link between individual risk factors and the development of infections during the post-transplant period. Subsequently, all significant variables with a p value < 0.05 in the univariate analysis were considered for a multivariate logistic regression
analysis. Survival curves of patients who developed infections and patients who did not develop infections were compared, considering the period during which infections developed, using Kaplan-Meier survival curves and the log-rank test.
The analyses were carried out using the Stata 14 statistical software (Stata-Corp. LP., College Station, TX, USA). 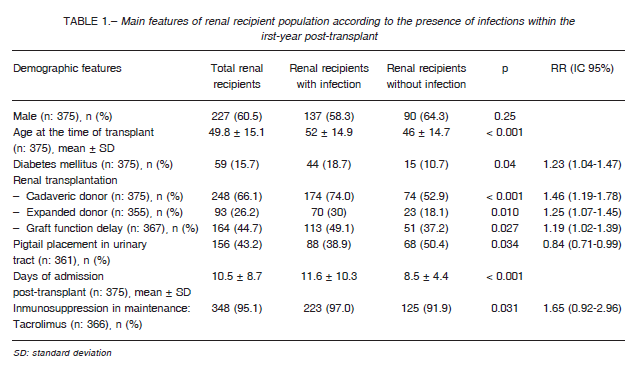 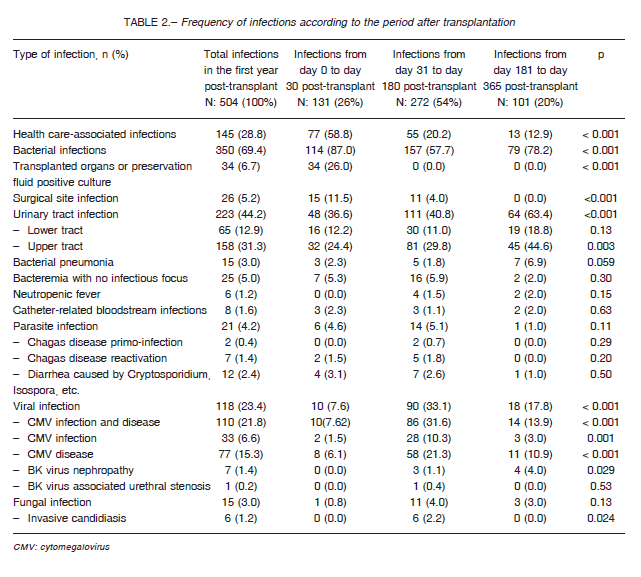 A total of 137 opportunistic infections were identified (27.2% of total infections), 56.2% of which were CMV disease (77 episodes), followed by 33 cases of CMV infection (24.1%), 9 cases of Chagas’ disease (6.6%) and 8 cases of BKV infection (5.8%). In addition, among the opportunistic infections identified, 5 cases of aspergillosis were diagnosed (4 in the intermediate period and 1 in the late period), as were 2 cases of pneumocystosis (1 in the intermediate period and 1 in the late period) and 1 case of nocardiosis (in the late period).
Kidney recipients had pre-transplant serology positive for Epstein Barr virus (EBV) (92%), CMV (91.7%) and Chagas’ disease (6.9%). CMV reactivation was observed in 24.1% of the CMV seropositive patients, and Chagas’ disease reactivation was identified in 26.9% of the patients who tested positive for the disease before transplantation.
No reactivation of other conditions was observed (Table 3).
Among patients with discordant serologies (seronegative recipients with seropositive donors), CMV transmission occurred in 56.5% (13/23) of the patients, and Chagas’ disease transmission occurred in 8.3% (2/24).
Transmission of other donor infections to recipient was not observed (Table 4).
Nineteen patients died (5.1%) during the follow-up period. There were no significant differences in mortality among patients with at least one infection episode and patients who had none (6.4% vs 2.9%; p = 0.13). Likewise, no significant differences were found between the survival curves of both groups at 12-month follow-up (with infection 93.8% [95% CI 89.8-96.3] vs. without infection 97.1% [95% CI 92.3-98.9]; p = 0.14). When analyzing patients’ survival rate after the infection episode, differences in survival curves were found depending on the period in which the infection was diagnosed (early period 88.9% [95%CI 81.5-94.3] vs. intermediate period 96.1% [95%CI 89.9-98.5] vs. late period 100%; p = 0.048). Eleven deaths occurred in patients who had infections in the first period after transplantation (11.1%), 4 occurred among those who developed infections in the second period (3.7%), and no deaths occurred in the third period after transplantation. 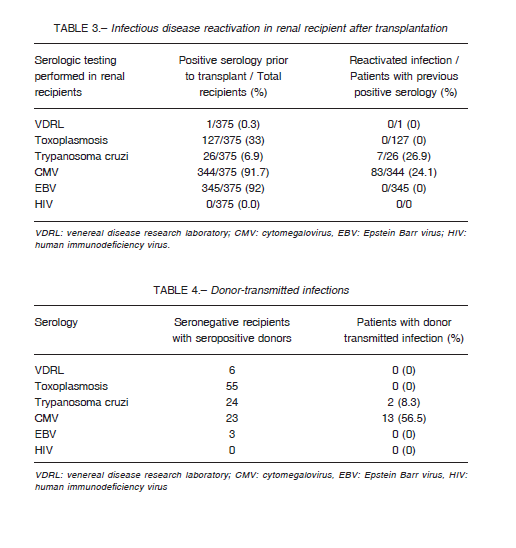 Conflicts of interest: None to declare

– Transplant patient: A patient who has received a renal graft from a living or deceased donor and is under immunosuppressive therapy.
– Delayed graft function (DGF) after renal transplantation: The need for dialysis within the first week after transplantation1.
– Renal allograft rejection: Acute deterioration of graft function associated with specific histological changes2.