New knowledge
• This experience compares results in a large cohort of patients with malignant diseases, according to the type of stem cell donor used. In this experience, haploidentical transplantation carries similar non-relapse mortality, but lower overall survival than unrelated donor transplantation

Allogeneic stem cell transplantation (AlloSCT) is a potentially curative treatment for patients with hematological diseases. For those patients lacking a matched sibling donor (MSD), other options for AlloSCT include unrelated donors (UD) and haploidentical donors (HD). Searching for an UD is a time-consuming procedure, and striking differences are observed in the length of time employed with this strategy in many countries 1, 2. Haploidentical AlloSCT is an option when patients require urgent AlloSCT, since most of the patients account with a convenient HD.
The widespread use of post-transplant cyclophosphamide made HD AlloSCT a feasible and a more accessible option worldwide, especially in low-income countries, where UD AlloSCT is a more complicated therapeutic option in many aspects, including the cost of the procedure, the length of time of the search, and the cost of the procurement 3-4.
There are several studies from North America, Europe, and Asia comparing the results of HD with MSD and UD in different AlloSCT situations 5-9, however prospective clinical trials comparing AlloSCT outcomes according to the type of donor are needed. 10, since the majority of the reports are retrospective studies 11-15. A previous published report compared outcomes of acute lymphoblastic leukemia patients transplanted in Argentina 16. There are no publications describing the outcomes of AlloSCT in other hematological malignancies according to donor type in our region.
We conducted a multicenter retrospective analysis to compare the outcomes of AlloSCT according to these types of donors. Our main objective was to assess the non-relapse mortality (NRM) and overall survival (OS).

We included consecutive adult patients (≥16 years old) who received an AlloSCT, between January 2012 and December 2016. Transplants were performed in 7 transplant units affiliated to GATMO-TC. The study was approved by local ethics committee according to Helsinki Declaration. All participating centers performed the three types of transplants. Patients who received a second AlloSCT or had a non-malignant disease were excluded. Data was obtained retrospectively from 570 medical records. Patients were followed longitudinally until death or last contact. Patients received a MSD, UD, or HD AlloSCT, depending on the center`s choice and donor availability.
UD donor category included matched 10/10 matched HLA antigens and 9/10 HLA-missmatched unrelated donors.
Stem cells graft sources included peripheral blood and bone marrow.
The variables analyzed were donor type; patient’s and donor’s age and sex; pre-transplant cytomegalovirus serological status; type of conditioning regime (myeloablative vs. reduced intensity); use of total body irradiation; type of immunosuppression; and stem cells source. Comorbidities were categorized using the hematopoietic cell transplantation – specific comorbidity index (HCT-CI) published by Sorror et al.17. Disease status was defined based on previous reports 18. Early stage disease included acute leukemia in first complete remission, myelodysplastic syndromes in first complete remission or with no previous treatment, and chronic myelogenous leukemia in first chronic phase, while other status was categorized as late stage disease.
Neutrophil and platelet engraftment were defined as achieving absolute neutrophil count ≥0.5 x 109/l for 2 consecutive days and ≥ 30 x 109/l platelets in two determinations, separated for at least 5 days, without transfusion. Fungal infections were defined as all confirmed fungal infection by positive culture and / or probable determined according to the physicians’ judgement. Acute graft-versus-host disease (aGVHD) and chronic graft-versus-host disease (cGVHD) were graded using Glucksberg and NIH classification 19, 20.
Our primary endpoints were non-relapse mortality (NRM), death from any cause without disease progression was considered an event, overall survival (OS), progression-free survival (PFS), and relapse. Secondary endpoints were engraftment rate, post-transplant cytomegalovirus reactivation, fungal infections, aGVHD and cGVHD incidence.
Statistical analysis was performed using SPSS, version 23.0 (SPSS Inc., Chicago, IL, USA), R, version 3.2 (R Foundation for Statistical Computing, Vienna, Austria. URL http://www.R-project.org/) and STATA, version 14.2 (Stata-Corp. 2015. Stata Statistical Software: Release 14. College Station, TX: StataCorp LP). Overall Survival and PFS were calculated using the Kaplan-Meier method. Non-relapse mortality, relapse, and cGVHD were calculated using cumulative incidence analysis. Death or relapse was the competing risk for cGVHD. Relapse was the competing risk for NRM. Dichotomic variables were analyzed with the chi-square test. Multivariate analysis was constructed for transplantation outcomes using a Cox regression model. All the variables with a P-value of 0.2 or less were included in the analysis. Results were considered statistically significant if the P-value was < 0.05. Variables that were considered clinically relevant for specific outcomes were included in the multivariate analysis, even those in which the P-value was not < 0.2 (i.e. myeloablative conditioning when addressing NRM, acute myeloid leukemia for NRM, Rel, OS, PFS, and late stage for relapse).

Median follow-up was 1.6 years. Main characteristics of the cohort are listed in Table 1. Patient´s mean age was 39 years (range 16-74 years) and donors’ mean age was 35 years (range 7-69 years). Almost sixty percent of the patients and the donors were males. Two hundred and forty patients (42%) received a MSD, 189 (33%) a UD (57% HLA-matched, 43% HLA-mismatched), and 141 (25%) a HD AlloSCT. Prevalent diseases were acute myeloid leukemia (AML) in 38% of the patients, acute lymphoid leukemia in 23%, myelodysplastic syndromes (MDS) in 15%, and lymphoproliferative diseases in 12%.
Two hundred and forty-one patients (42%) had a low HCTCI index, and 58% of the cohort was transplanted in the late stage of the disease. A myeloablative conditioning, mainly based on busulphan combinations, was used in 72% of the patients. 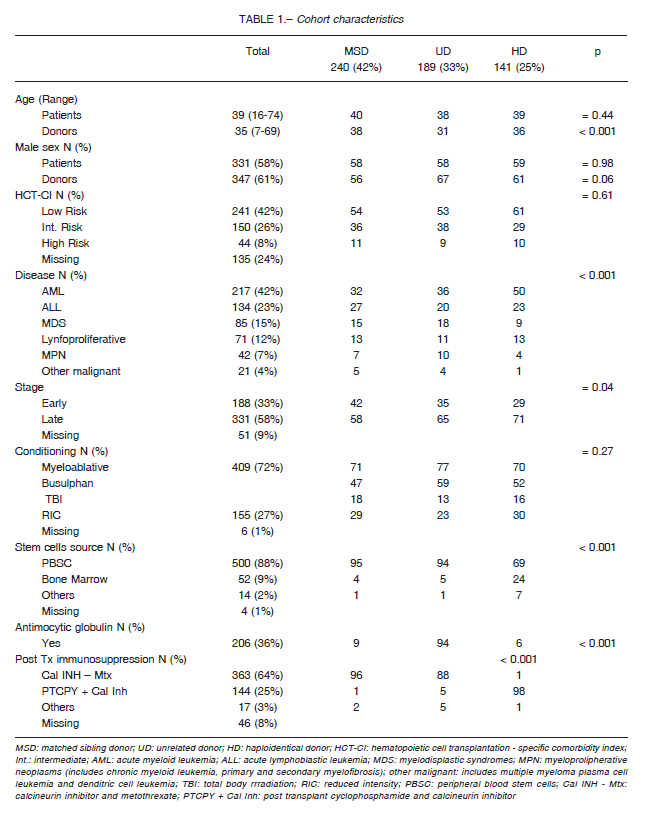 In this retrospective cohort analysis, NRM after HD and UD AlloSCT was similar; with lower OS and PFS for HD AlloSCT due to a higher relapse rate. Acute GVHD II–IV was higher than expected in the HD transplant setting.
Although some publications 14, 15, 17 encourage the choice of HD in the absence of a MSD, in our experience there were some benefits for those patients who received an UD transplant, as other studies have previously shown 26.
We found that both the incidence of the graft failure and the neutrophil recovery time, were higher in patients who received a HD AlloSCT in comparison to the other groups of patients. Similar results have been published by other authors 8, 10 , raising the hypothesis that post-transplant cyclophosphamide could be the main cause for this delayed bone marrow recovery. Recently, Rashidi et al.11 compared 83 newly diagnosed AML patients who received an AlloSCT, either HD, MSD, or UD. They uniformly used post-transplant cyclophosphamide as primary GVHD prophylaxis in the three types of transplants. Both neutrophil and platelet recovery times were longer in the HD AlloSCT group. This fact raises the possibility that the engraftment delay may be mainly due to HLA disparity rather than to the use of post-transplant cyclophosphamide, as it was previously considered. 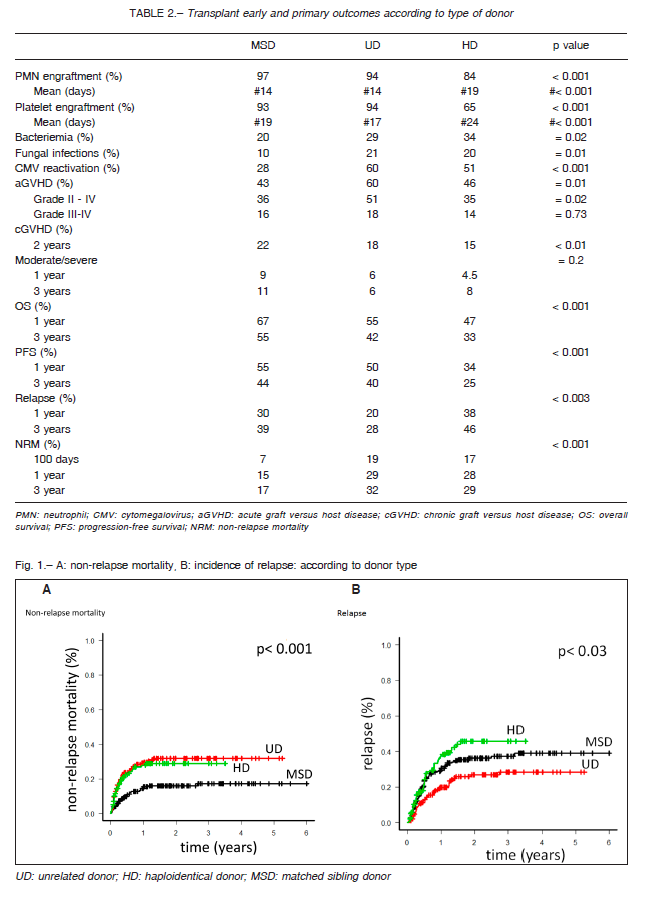 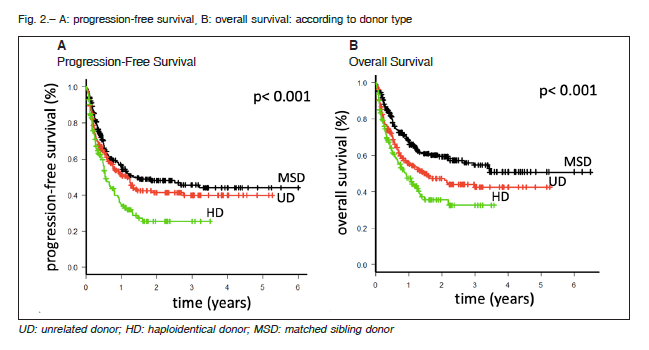 Acknowledgements: We thank the physicians from the transplant centers who made possible the collection of clinical data