Abstract Social vulnerability has proved to be an independent risk factor for hypoglycemia in patients with diabetes. In some countries, patients who are in a vulnerable situation are assisted in the public health system which provides free medical care. This study compares the prevalence of hypoglycemia among patients with type 2 diabetes (T2D), in public versus private sector and its relationship with social vulnerability. This multicentric descriptive study included 600 patients with T2D from public and private care institutions of Argentina. Socioeconomic level (SEL) was evaluated through the Marketing Argentinean Association survey. Number of severe, documented symptomatic and asymptomatic hypoglycemias were registered. Among the patients included, 66% were assisted in the public sector. The 41% of patients (n = 246) registered at least 1 episode of any hypoglycemia event being more prevalent in the public sector compared to the private sector (50% vs. 22%). In the adjusted analysis it was observed a greater risk of hypoglycemia in public sector (OR 4, 95% CI 2.65-6.04) and in patients that did not have diabetological education (OR 2.28 95% CI 1.35-3.84). Similarly, unemployment (OR 5.04 95% CI 2.69-9.46), and marginal SEL (OR 60.79 95% CI 14.89-248.13) increased the risk of hypoglycemia. Several factors related to social vulnerability as unemployment, marginal SEL and poor sanitary education showed a significant increase in the hypoglycemia risk. Professionals working with people with diabetes must take into account these factors for a safe treatment of the disease.

The epidemic of diabetes currently affects lower income populations mainly, increasing not only its prevalence but also the risk of complications 1, 2. It is estimated that 79% of people with diabetes worldwide live in low and medium income countries 3. In Argentina, the prevalence of diabetes is higher in groups of lower income compared to the higher income groups (10.3% vs. 7.3%) 4. Poverty predisposes low socioeconomic level (SEL) people to an inadequate control of their disease since they are in a more vulnerable situation than people of higher income.
Social vulnerability is defined as the reduced ability of a person or group of people to respond (in the sense of cope with, recover from, or adapt to) any external stresses or pressures placed on their livelihoods and well-being 5. This term includes diverse factors such as food insecurity, low SEL, low level of education and a poor sanitary education.
According to studies published to date, social vulnerability has proved to be an independent risk factor for hypoglycemia in patients with diabetes 6. Hypoglycemias are an undesirable effect in the diabetes treatment, which makes this disease control even more difficult.
In our country, the health system is mixed and it comprises three sub-sectors: Public (38% of the population), social security (SS) (46%) and private and prepaid sector (16%). SS includes health insurances, which involucres different types of institutions, such as provincial health care, union health insurances, mixed administration health providers and the Integrated Medical Assistance Program (PAMI for its acronym in Spanish), oriented to retired and pensioners 7-10. Patients who are in a vulnerable situation (unemployed or with informal jobs) have access to the public health system which provides free medical care to people with no health insurance and people who can’t afford to pay one. Instead, the private health care sector (health insurance or prepaid medical care) provides coverage to people with a formal job and with higher SEL in general.
In our knowledge, there are no studies up to date assessing the relationship between hypoglycemia and
socioeconomic factors in patients with diabetes comparing the public and private health sector.
The aim of this work was to compare the prevalence of hypoglycemia among patients with type 2 diabetes (T2D) in the public versus private sector and its relationship with social vulnerability.

A multicentre, analytic, observational, transversal study was conducted in a public Hospital and in private care institutions of Province of Córdoba, Argentina. Ambulatory patients with T2D diagnosis, over 18 years old were included, from January 2nd, 2017 to January 2nd, 2018. Patients with type 1 diabetes (T1D), pregnant and hospitalized patients were excluded.
The following variables were considered: age, sex, time of evolution of the disease, treatment (insulin, sulfonylurea, metformin, incretins, SGLT2 inhibitors), duration of the insulin therapy, weight, height, body mass index, chronic microvascular complications (retinopathy, nephropathy, peripheral neuropathy), macrovascular complications (cerebrovascular accident, acute myocardial infarction and peripheric vascular disease), glycosylated haemoglobin, HbA1c, (measured by methods standardized to the High Performance Liquid Chromatography –HPLC method–), serum creatinine, creatinine clearance calculated by the Modification of Diet in Renal Disease study (MDRD) equation, hypoglycemia prevalence and its causes, previous diabetological education, level of education reached, occupation, medical coverage and SEL.
Data of clinical variables was collected from medical history review.
The social, educational and economic dimension was taken into account to evaluate SEL. This evaluation was done through the Marketing Argentinean Association survey that takes into account occupation of the main income earner, educational level reached, possession of goods and services and type of medical assistance (health care or public sector assistance). The final total score allowed us to include patients in six types of SEL. In our study the classification was simplified in four categories: High, medium (mid-high nd mid-typical) low (superior low category and inferior low category) and marginal SEL 11.
The educational level was categorized according to the maximum educational level reached in two categories: primary level of education or less (illiterate and completed primary) and secondary or more (completed secondary or more). The health care sector was classified in public sector (patients with no health insurance) and private sector (pre-paid medical care and health insurance). Taking into account the occupation, patients were classified as unemployed, employed, retired and pensioner.
Unemployed was defined as any person who, not having an occupation, is actively seeking work. Occupied included all those who were not looking for work and had a stable income. Retired included all those who, having completed the established work cycle, stops working because of his age and receives a pension. Pensioners was defined as anyone who receives non-contributory social security pensions due to disability (people who show a decrease of 76% or more in their work capacity).
Data about hypoglycemia was obtained by self-report during the medical interview and classified in the following way 12: Serious or severe hypoglycemia: event which required a third person’s assistance
Every type of hypoglycemia event: total of the severe and not severe events.
Symptomatic documented hypoglycemia: event with typical symptoms which was confirmed by a blood glucose measure – ment ≤ 70 mg/dl and it was registered in the patient’s diary.
Asymptomatic hypoglycemia: no symptoms appeared, but the blood glucose was ≤ 70 mg/dl and it was registered in the patient’s diary.
The number of severe hypoglycemia episodes within the last 12 months and documented symptomatic hypoglycemia and asymptomatic in the last month was registered during the medical interview.
Presence of diabetic retinopathy (DR) was evaluated though a funduscopy performed by an ophthalmologist. The findings are classified in normal and diabetic retinopathy.
Diabetic nephropathy was evaluated according to urinary albumin-to-creatinine ratio (UACR) measured in isolated urine samples or in 24 hours urine collection. An UACR < 30 mg/g creatinine was classified as norm-albuminuria, between 30-300 mg/g creatinine as micro albuminuria and values > 300 mg/g creatinine as clear proteinuria, for which two measurements are required higher than such values, for the diabetic nephropathydiagnosis 13.
Chronic renal disease was defined in the 3rd stage or based in the glomerular filtration rate of the MDRD formula 14.
Peripheral diabetic neuropathy was established by taking into account the assessment of symptoms and signs by means of the Neuropathy Symptom Scale (NSS) and Neuropathy Disability Score (NDS) where the vibrating, tactile, termoalgesic sensitivity, the muscular strength and the osteotendinous reflexesare evaluated 15.
Presence of macrovascular complications was considered in patients with acute myocardial infarction antecedents, coronary-aortal bypass, percutaneous angioplasty, positive stress test, cerebrovascular accident or peripheral vascular disease history (ABI < 0.9, angiography or revascularization history).
After completing the data sheet from the analysis of medical histories, a descriptive statistics analysis was carried out in accordance with the nature of the variables. For the measurable variables, central and dispersion statistics measures were used (medium, standard deviation); and for the categorical type, the percentage absolute and relative frequencies were studied. For the execution of the inferential analysis the Square Chi test and media differences test were used.
To evaluate independent risk factors, a logistic regression analysis was performed with and without adjustment of variables; Odds Ratio (OR) values were expressed together with their respective 95% confidence intervals (95% CI). Level of significance α = 0, 05 was established. All the analyses were executed with the Stata 14 Software.
The study was approved by the Ethics, Training and Teaching Committee of each of the institutions. All the patients signed the informed consent.

In the last decades, the epidemic of diabetes has taken root in developing world, and it is known that 3 in 4 people with diabetes live in low-medium income countries, an epidemiological trend that will continue increasing in the next years 16. In the same case as with other chronic pathologies, in the case of diabetes, poverty and social exclusion add to the disease a negative effect establishing a vicious circle which worsens health outcomes and affects even more social welfare.
Hypoglycemic episodes are an undesirable effect in the treatment of diabetes, which commonly increase in the desire to diminish the development of chronic complications of the disease. This condition is associated to cardiovascular episodes and cardiovascular death, and also to an increase of morbidity, health expenses and a significant impact in the quality of life, which can worsen the situation of people with this disease 12, 17, 18.
In this study, the frequency of any hypoglycemia episode in T2D was high (41%). Data related to the
prevalence of hypoglycemia in observational studies in T2D are limited and the reports coming from clinical trials that mainly refer to the prevalence of severe hypoglycemia 19-22. In a meta-analysis of 46 clinical trials there was a prevalence of mild and moderated hypoglycemia of 48% and 6% of the severe type 23. The results in Argentina of the Hypoglycemia Assessment Tool (HAT) multinational study informed a prevalence of 48.6% of any type of hypoglycemia episode inT2D treated with insulin 24. 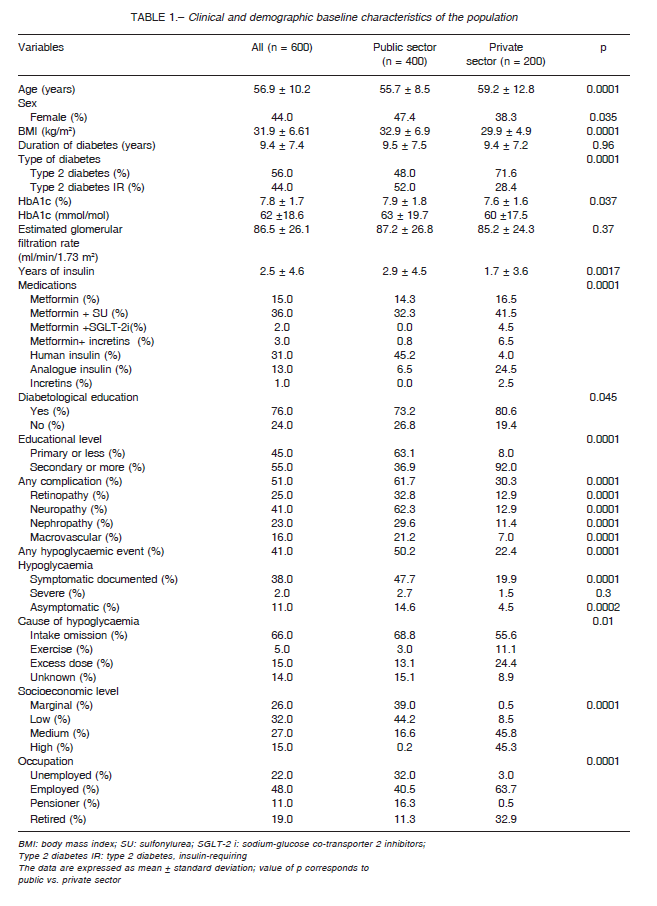 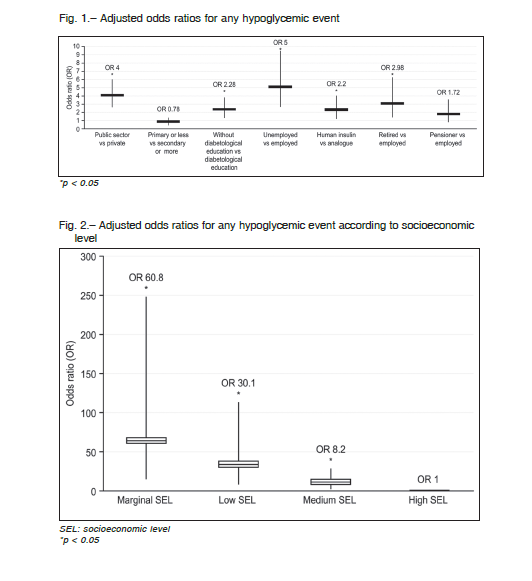