Neuroblastoma is the most common solid tumor arising outside the brain 1. Variable clinical course is observed from spontaneous tumour regression (as in infants with stage Ms disease), tumour maturation to a benign histologic form, to another extreme of agressive metastasic disease. Much effort has been given to find predictive factors to clarify clinical outcomes and hence to guide the treatment. The stage of the disease, the age at diagnosis, MYCN oncogene amplification, and Shimada histological grading have all been documented as prognostic factors. Treatment stratification will be based on these prognostic factors ranging from low intensity chemotherapy to intensive multi-modality approaches. When presenting in infants, it has particular characteristics. Localized tumors diagnosed before 1 year of age usually have a favorable prognosis. Outcomes for patients with localized disease (stage L1, L2 according to INRG classification system) and those classified as Ms, are excellent. International published results report 3-year Overall Survival (OS) and Event Free Survival (EFS) rates of 85% and 97% respectively, for patients with low-stage neuroblastoma 2.
EFS and OS are also higher in patients whose tumors are hyperdiploid rather than diploid, being a favorable prognostic factor. However, patients with unfavorable biological features, especially MYCN amplification, still have less favorable prognosis 3, 4. We reviewed patients under 18 months of age diagnosed with neuroblastoma, to evaluate clinical and biological features, as well as outcome. 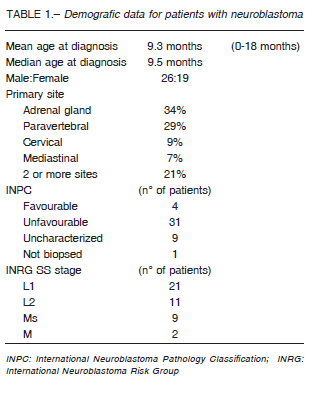 Results
Data regarding 45 patients with neuroblastoma were analyzed.
Amplified MYCN was documented in 5 out of 38 patients (7 not evaluated), deletion of 1p (del1p) in 4 patients (12 without evaluation), and 11q aberration in one patient (only 8 patients studied). Two patients were excluded from the following analyses due to loss to follow up.
According to INRG pretreatment classification schema, twenty-one patients belonged to L1 category, receiving treatment with chemotherapy (n = 1), surgery (n = 15), chemotherapy followed by surgery (n = 4) and observation only (n = 1). No unfavorable biological features were detected in this group. Relapse occurred in 2 patients (+2 and +9 months after surgery); one of them died from infectious complication, the other is in complete remission at 74 months, after receiving chemotherapy and surgery (pathologic results after chemotherapy showed: ganglioneuroblastoma). Other patient with Nijmegen syndrome developed acute megakaryoblastic leukemia, 5 months after complete resection of neuroblastoma.
Eleven patients were classified as L2 tumors; therapy consisted of chemotherapy (n = 3), surgery (n = 4) and combined surgery plus chemotherapy (n = 4). Amplification of MYCN was present in one patient, who received 4 cycles of Cy/Dox alternating with Carboplatin/VP; del1p was detected in other case, treated with 4 cycles of oral Cy. Both patients with cervical localized tumors, underwent initial surgery followed by chemotherapy, and maintained complete remission to more than 24 months.
Nine stage M patients received treatment for intermediate-risk (n = 5) (one aberration of 11q) and high-risk groups (n = 4) (1 amplification of MYCN, 3 amplification of MYCN and del1p). All three patients with MYCN amplification and del1p died after progression or relapse (time from event to death: +1, +2 and +4 months). Patient with 11q aberration has stable disease +45 months after progression, receiving metronomic chemotherapy.
Two patients classified as Ms stage, received therapy strategy for low-risk (initial observation followed by 6 cycles of V due to subcutaneous nodules progression after 1 month) and very low-risk groups (observation).
Permanent damages by surgical complications were observed in 4 patients: stage L2 (n = 1), L1 (n = 2) and
M. Sequelae consist on Horner Syndrome, swallowing disorder, uretero-hydronephrosis and nephroureterectomy, eyelid ptosis secondary to stellate ganglion injury. One high-risk patient, who received radiotherapy, present permanent decreased visual acuity (patient with exophthalmos at diagnosis).
With a median follow-up of 53 months (range: 6-109), after 2 years, the EFS of all patients was 83% (SE 6%) and OS of 88% (SE 5%). Significant difference was found in OS and EFS between patients with stages L1, L2 and Ms vs. stage M (p = 0.01). EFS for each stage was: L1 85% (SE 7%), L2 100%, MS 100%, vs M 55% (SE 16%). OS: L1 90% (SE 6%), L2 100%, MS 100%, vs M 66% (SE 15%) (Fig 1).

Discussion
Neuroblastoma prognosis is variable based on the age at diagnosis, the stage and biologic features of the tumor. Treatment varies depending on risk group and can range from observation or only surgery for low risk patients to aggressive multimodality treatment for patients with MYCN-amplified tumors. Infants with L1 or Ms tumor, without unfavorable biological characteristics, are classified as very low risk group, according to INRG pretreatment schema. Consequently, most of these patients can be observed as initial treatment strategy. In our series, only 2 patients underwent observation. Prospective studies are needed to evaluate outcome of infants treated with an observational strategy, compared to those receiving surgery. Probably more patients could have benefited from non-interventionist treatment 8.
In regards to reduce treatment, data suggest that intensive chemoradiotherapy may not be necessary for
patients with low-stage, MYCN-amplified neuroblastoma whose tumors are hyper-diploid, being candidates for reductions in currently designated intensive therapy 3. Data regarding tumor cell ploidy were not available in our group of patients. On the other hand, a factor associated with poor prognosis and MYCN- amplification, is low urinary catecholamine excretion 9. Normal urinary values of norepinephrine and vanillylmandelic acid, suggests immaturity of catecholamine metabolism in neuroblastoma tumors.
The relationship between immaturity of catecholamine metabolism and prognosis has been reported in several studies. Efforts has to be made to achieve the study of this prognostic factor in all patients with neuroblastoma.
Concerning to L2 tumors, surgery extension have been defined. Although surgery plays a role in the diagnosis and management of all stages of neuroblastoma, achieving a complete resection in infants staged as L2, should be deeply analyzed. Considering the excellent prognosis (EFS and OS) in this group of patients, morbidity should be minimized.
Previously published reports indicate that patients with low-stage neuroblastoma can be successfully treated with surgery alone. Surgery and/or radiation therapy can be used to manage recurrences. Metastatic relapses are rare and often treated successfully with chemotherapy.
However, patients with localized tumors with unfavorable biologic features, particularly NMYC amplification, have a worse prognosis, despite low disease stage at diagnosis and treatment. Management of these patients remains controversial 3.
Only 1 patient in the L2 group present NMYC amplification, achieving complete remission after surgery and
moderate-intensity chemotherapy (carboplatine/VP/ Cy/Dox: 4 cycles). Other patient with 1p deletion underwent surgery and adjuvant low-intensity chemotherapy (oral Cy: 4 cycles). Both remain without evidence of disease after 30 and 90 months. Therefore, cooperative clinical trials should be carried out in order to define characteristics and biological factors that can predict a less aggressive tumor behavior and, consequently, can receive less intensive treatment, avoiding sequelae and morbidity. 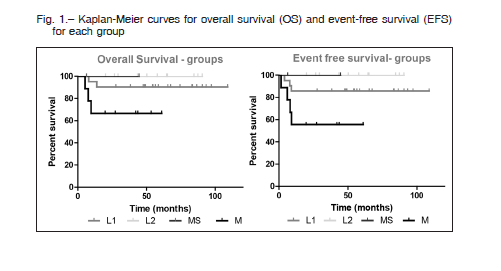 OS and EFS results are similar to those reported in international studies. Only 2 patients (L1 and Ms) have been observed as initial treatment. However more patients could have benefited from this treatment strategy, which should be re discussed in the future and is currently being implemented in our institution. Further studies should be carried out to determine the less aggressive treatment for patients with low stage neuroblastoma, with and without unfavorable biologic features. It is essential to study biologic factors in 100% of the patients. Better identification of biological prognostic factors will warrant accurate staging and consequently an appropriate treatment.