Abstract Rheumatoid arthritis is a clinical autoimmune syndrome that causes joint damage. The positive or negative anti-cyclic citrullinated protein (CCP) antibodies serodiagnosis differentiates two subsets of the disease, each with different genetic background. Previous studies have identified associations between KIR genes and rheumatoid arthritis but not with anti-CCP serodiagnosis. Therefore, we investigated the proportion of patients seropositive and seronegative to anti-CCP and its possible association with KIR (killer cell immunoglobulin-like receptor) genes. We included 100 patients with rheumatoid arthritis from western Mexico, who were determined for anti-CCP serodiagnosis by ELISA, and 16 KIR genes were genotyped by PCR-SSP. The proportion of seropositive anti-CCP patients was 83%, and they presented a higher frequency of KIR2DL2 genes than the seronegative group (73.6% vs. 46.2%, p = 0.044) which, in turn, presented a higher KIR2DL2-/KIR2DL3+ genotype frequency than the first ones (46.2% vs. 17.2%, p = 0.043). These results suggest different KIR genetic backgrounds for each subset of the disease according to anti-CCP serodiagnosis.

Rheumatoid arthritis (RA) is a clinical autoimmune and degenerative syndrome characterized by chronic synovial inflammation, joint damage, and extra-articular manifestations. The different subsets of the disease involve particular inflammatory cascades with presence or absence of autoantibodies, which, although they may converge in a common clinical pathway, promote critical immunopathological variations that contribute to the heterogeneity of RA 1-3.
Anti-cyclic citrullinated peptides (anti-CCP) are currently the most important autoantibodies in the classification of RA; their presence is considered an essential autoimmune feature that differentiates two subsets of disease: seronegative and seropositive anti-CCP. Each subtype of RA involves different molecular mechanisms, prediction of the course of the disease, response to treatment and genetic background 4, 5.
The etiology of RA is multifactorial, around 50% corresponds to genetic factors, which vary according to different populations. These variations, together with the socio-environmental factors of each geographical location, could explain the oscillations of prevalence and immunopathological heterogeneity, including anti-CCP serodiagnosis in RA around the world 6-8.
In autoimmunity, especially in RA, cell populations have been identified with atypical KIR expression, however, the underlying immunological mechanisms are not yet clear. It is estimated that several factors are involved in these mechanisms, for example: the surrounding microenvironment, cellular phenotypes and KIR genetic background, which may include (non-Mendelian inheritance) up to 16 genes: 6 activators (KIR2DS1-5, KIR3DS1), 8 inhibitors (KIR2DL1-5, KIR3DL1-3) and 2 pseudogenes (KIR2DP1, KIR3DP1) 9-11. Currently, an area of RA research is focused on identifying genetic markers or genetic backgrounds to distinguish different subsets and stages of the disease.
However, the immunological implication derived from KIR genetic differences between each subtype or stage of the disease is not yet clear. In this study, we aimed to identify if the anti-CCP serodiagnosis is associated with KIR genes in RA patients from western Mexico.

One hundred unrelated patients from western Mexico were included, all previously classified as RA by rheumatologist physicians according to the American College of Rheumatology and European League Against Rheumatism (ACR-EULAR) 2010 criteria 12, 13. They were recruited from the Rheumatology Department of the OPD Hospital Civil de Guadalajara “Fray Antonio Alcalde”, Guadalajara, Mexico. Anti-CCP antibodies levels in serum were assessed with a second-generation semiquantitative enzyme-linked immunosorbent assay (ELISA) kit (Axis-Shield Diagnostics Limited, Dundee, Scotland). The immunoassay was performed following the manufacturer´s instructions and was considered seropositive when the anti-CCP antibodies titers were higher than 5 U/ml. Genomic DNA was extracted from peripheral blood leukocytes using the saltingout method 14. KIR genotyping to identify presence or absence of 16 KIR genes was performed using PCR-SSP according to conditions previously described 15. The KIR gene frequencies and genotypes were determined by direct counting.
Differences in KIR gene and genotype frequencies between RA patient subsets were assessed with the chi-squared test (Yates correction was considered when necessary); in both the OR and the 95% Confidence Interval (CI) were calculated with Cornfield method, statistical significance was considered when p < 0.05. The results are shown in frequencies, mean and standard deviation. Data processing was performed using Epidat software, v3.1, developed by the Consellería de Sanidade de la Xunta de Galicia with the support of PAHO-WHO.
The committee of biosecurity and ethics of Centro Universitario de Ciencias de la Salud, Universidad de Guadalajara, approved the present study. All patients were under pharmacology treatment, and they gave written informed consent, in compliance with The Code of Ethics of the World Medical Association, Declaration of Helsinki, 2013.

A total of 100 RA patients were included, their anti-CCP serodiagnosis was determined and, based on it, they were classified in two RA subgroups: anti-CCP seropositive and anti-CCP seronegative (87 vs.13, respectively): Demographic characteristics: age, gender, family history of autoimmunity, duration of the disease, DAS28 and HAQ were similar (Table 1).
Both groups showed similar frequencies of KIR genes, except for the KIR2DL2 gene, where the frequency was higher in anti-CCP seropositive than in anti-CCP seronegative patients (73.6% vs. 46.2%, p = 0.044). It is important to note that only the subgroup of seronegative patients presented a 100% frequency in all genes reading frame: 2DL4, 3DL2-3, 2-3DP1 and 2DL1 (Table 2). 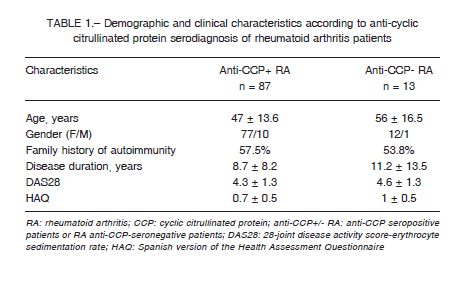 The KIR2DL2/L3 genotypes frequencies were based on the presence or absence of these KIR genes in both groups of patients. We found a higher frequency of KIR2DL2-/L3+ genotype in anti-CCP seronegative patients, compared with those anti-CCP seropositive (46.2% vs. 17.2%, p = 0.043), whereas KIR2DL2+/L3+ was the second most frequent genotype in seronegative but the most frequent in seropositive patients (Table 3).

The association of KIR genes in different autoimmune processes is evident, especially in RA 16-22. However, its immunological participation, in particular in the production of autoantibodies, is still under study. Some research studies have found genetic differences between anti-CCP positive and anti-CCP negative subsets in RA, which could have immunological implications through poorly understood mechanisms 5, 8, 23-26.
In this study, we evaluated if KIR genes are associated with anti-CCP serodiagnosis in RA patients from western Mexico. Our results show a proportion of 87% of seropositive anti-CCP patients, a percentage similar to other published 23, 27, 28. The seropositivity to autoantibodies is an important factor that must be considered in the management of the RA patients since studies have shown their good performance in diagnosis and clinical impact as a lung involvement and pro-inflammatory profile in neutrophils 29-31. 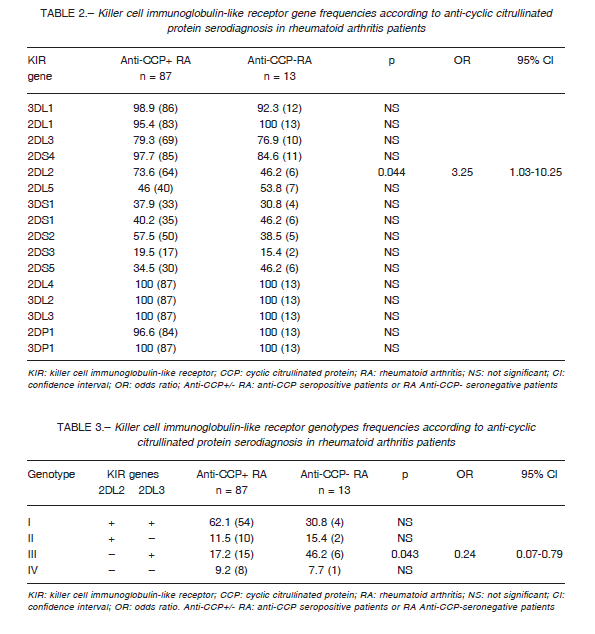 We also identified the association of KIR2DL2 with seropositive anti-CCP in RA. According to the above and with the previously published data, it seems that the KIR2DL2 gene is involved in the immunopathology of RA 16, 18, extra-articular manifestations 25, response to anti-TNF and methotrexate therapy 17, 18 and, also, with anticardiolipin antibodies in patients with systemic lupus erythematosus 32. Even autoantibodies against KIR receptors have been found in autoimmune processes 33. It has also been observed an association of KIR2DS4full with poor response to methotrexate 34. In Mexico, differences have been identified in the frequencies of KIR2DS4 gene variants (full and deleted) between the western and southern regions of the country; the KIR2DS4del variant is more frequent in the west. These differences are related to the genetic admixture in both regions 35.
Several studies have shown that the various clinical manifestations of RA, extra-articular disease, vasculitis, bone erosion, disease activity, can be triggered by different immunological profiles, supported by different genetic backgrounds 25, 36, 37. These differential genetic characteristics of each clinical subgroup of RA in a specific geographic context, are derived from unequal ethnic distributions according to evolutionary genetics and endow the population of Western Mexico with specific, but not exclusive, genetic predisposition and protection factors to diseases 23, 35.
Studies have revealed that the expansion of CD4+CD28null lymphocytes is a strong subclinical marker for systemic complications in RA 38, however, it is unknown whether this association with the cell subpopulation with KIR expression is maintained and whether its immunophenotypes influence the production of anti-CCP. A decrease in CD56dim NK cells has also been observed in seropositive anti-CCP patients, which suggests an interaction between auto-antibodies and CD16, so further studies are necessary to identify the KIR expression in this cell population, and its underlying genotypes, to clarify whether KIR plays a role in the functional mechanisms associated with this cellular degeneration 39.
There are several –and not exclusive– hypothetical mechanisms: decrease in the activation threshold of NK cells 40, increase of CD4+ and CD8+CD40L+ T cells 41,42. All the cell populations described above can express KIR2DL2/L3 inhibitors and activate B cells and osteoclasts, and these, in turn, activate more CD4/CD8 T cells perpetuating the inflammatory process and probably the production of antibodies 10, 43-45. However, the information is insufficient to clarify the function of KIR2DL2/L3 expressed in NK cells and T cells of RA patients 46.
Another significant finding in our study was the increased frequency of KIR genotype KIR2DL2-/KIR2DL3+ in anti-CCP negative patients compared with the anti-CCP positive. KIR2DL3 gene is associated with RA protection 16, 19, 47, but its presence in RA patients is associated with anti-CCP negative status only if KIR2DL2 is absent. According to previous study results, systemic lupus erythematosus patients seronegative to anticardiolipin antibodies have higher frequencies of the KIR2DL3 gene than seropositive patients 32.
These results suggest that the presence of the KIR2DL2 gene is associated with seropositive anti-CCP and its absence, in addition to the presence of the KIR2DL3 gene (KIR2DL2-/L3+), with seronegative RA. This supports the hypothesis that the RA subtypes, according to the anti-CCP serodiagnosis, have different KIR genetic background that contributes to the clinical heterogeneity of the disease.
The present study did not consider the study of KIR expression in cell populations, nor the effect of pharmacological treatment on anti-CCP levels. In this regard, there are studies that differ in the reported effect according to the pharmacological strategies of monotherapy, complementary or biological used, as well as to the antibody determination techniques 48, 49.
Taking into account the reports that associate pharmacological treatment with reduction in anti-CCP levels, in patients with decreased activity of the disease 49, 50 and considering that both groups of patients in our study, showed on average DAS-28 scores within the range of moderate activity (DAS28: 3.2-5.1), a considerable duration of the disease (more than 8 years), and without biological therapy (only traditional pharmacological treatment: methotrexate-corticosteroids), we can expect an inevitable but moderate statistical bias in our results.
However, and because it is unacceptable professionally to carry out longitudinal studies with virgin patients to treatment, the development of studies that help to clarify the effects and molecular mechanisms of the various pharmacotherapies on the generation of autoantibodies in autoimmune processes (and of associated genetic factors) is imperative.
In conclusion, this work represents an approximation in the identification of KIR gene associations with anti- CCP serodiagnosis in RA patients from western Mexico.
However, more robust basic and clinical studies are needed that consider biochemical, socio-environmental parameters, evolution of the disease and response to treatment, to clarify the role of KIR genes in the improvement of clinical management of RA patients.

Acknowledgements: This research was funded by “PROSNI-2015 program” from Universidad de Guadalajara