Abstract Misdiagnosis is a challenging risk in young patients with ischemic stroke that leads to delayed recognition, prevents thrombolytic therapy and increases morbidity and mortality. To assess the
frequency and reasons for misdiagnosis of ischemic stroke in young adults in the emergency department, we retrospectively evaluated 101 consecutive patients. The diagnosis required both the presence of an ischemic lesion in diffusion-weighted MRI as well as neurological symptoms. Twenty-three individuals were misdiagnosed (15 females, mean age 43 years [range 26-55 years]). The most common diagnostic errors included headache/ neck pain n = 11 (48%) and peripheral vertigo n = 4 (17.3%), and the most common missed etiology was arterial dissection (AD) n = 15 (65.2%). The initial diagnosis was made by emergency physicians in 22 persons. The group with misdiagnosis had a significantly higher frequency of AD at 15 vs. 8 (p < 0.01), posterior territory involvement at 12 vs. 6 (p < 0.01), and female predominance. Misdiagnosis occurred in a third of young patients with an ischemic stroke and was more frequent in those with arterial dissection involving the posterior circulation and presenting with non-specific symptoms.

Stroke is a leading cause of disability, and up to 12-15% of all ischemic cerebrovascular events affect young persons 1-3.
Misdiagnosis in young patients remains a challenging risk due to reduced awareness, more heterogeneous etiologies and low prevalence of cardiovascular risk factors than in the elderly 3-5.
Moreover, young individuals are less likely to consult after onset of symptoms because they do not appreciate the risk of stroke. Delayed recognition is a serious problem in this group as it reduces the potential use of thrombolytics, increasing their morbidity and mortality risks 2, 6-7.
Few studies, and those with only a small number of patients, have investigated the reasons for misdiagnosis of stroke in young adults 2, 4.
We evaluated this issue in 101 consecutive young persons with ischemic stroke (IS) with the aim of identifying the most common and preventable causes of errors.

We performed a retrospective analysis of misdiagnosis of IS among young patients from the Hospital Británico, the principal center for the AISYF (Argentinean Initiative for the Study of Stroke in the Young and Fabry disease). AISYF was a prospective, multi-center, national study of ischemic and hemorrhagic stroke in young patients (ages ranging from 18 to 55 years old) in Argentina. Age criteria was selected based on the SIFAP study, the largest screening study of Stroke in the Young and Fabry disease. Our Institutional Review Board approved the study, and all patients gave their informed consent.
We reviewed the clinical records of all young patients admitted with a final diagnosis of IS confirmed by brain CT or MRI. Patients with hemorrhagic stroke or transient ischemic attack (TIA) were excluded for this analysis. Misdiagnosis was considered when IS was not identified as either a primary or differential diagnosis during evaluation in the emergency department (ED).
We reviewed the demographic and clinical characteristics of all our patients including: presence of cardiovascular risk factors; initial neurologic symptoms; erroneous initial diagnosis in the ED; involved arterial territory; etiology of stroke; National Institute of Health Stroke Scale (NIHSS) score; Rankin Modified Scale (mRS) score; and Barthel Index for daily activities. Additionally, we compared these characteristics between patients with and without misdiagnosis of IS.
All data was presented as a percentage for categorical variables or as mean and standard error for numerical variables. The non-parametric Mann-Whitney test was used for numerical variables, and for categorical variables the Fisher test was performed. A two-tailed value of p < 0.05 was considered statistically significant. The statistical analysis was carried out with SPSS22.0 (SPSS Inc.) software.

Among the 101 young patients included in our hospital, 23 were excluded due to hemorrhagic stroke or TIA. Of the remaining 78 with IS, 23 (15 females, mean age 43 years, range: 26 to 55 years) were misdiagnosed when first seen in the ED. In the group with misdiagnosis, the most frequent initial symptoms included headache and neck pain followed by nausea, vomiting and dizziness (Table 1). Headache and peripheral vertigo were the most common diagnostic errors (15/23) (Table 1).
Clinical signs that were initially missed in 50% of these patients in the ED and later identified by the first neurological consultation included Horner’s syndrome (9), mild focal weakness (monoparesis or hemiparesis) (7), ataxia (5), nystagmus (3) and hemianopia (2) (Table 1).
The non-misdiagnosed group frequently had a combination of neurological signs with high predictive value for stroke, including hemiparesis (37), dysarthria or aphasia (10), hypoesthesia (12) and hemianopia (9) (Table 2).
Misdiagnosed patients were more frequently females (65%) as well as those who had a significantly higher frequency of dissections (62% vs. 14% p < 0.0001), Horner’s syndrome (39.1% vs. 3.6% p < 0.001), ataxia (21.7% vs. 5.4% p < 0.045), stroke involving the posterior circulation (52% vs. 10% p < 0.0001) (Table 2). Misdiagnosis was made by staff of emergency and internal medicine residents, and only one patient was not identified by a neurologist.

Over 60% in both groups had one or more cardiovascular risk factors. NIHSS scores at admission were lower in those with misdiagnosis, but this difference did not reach statistical significance (Table 2). Five (21.7%) of this group were initially discharged from ED, and three of them had an NIHSS score equal to 0 and were readmitted at the second visit for persistence of symptoms.
Two with misdiagnosis arrived within the therapeutic window for thrombolysis.

Studies in young patients with IS have mainly focused on demographic characteristics, etiologies and prognosis; however, information concerning misdiagnosis in this population is scarce 4. Cerebrovascular disorders are misdiagnosed in the ED at non-trivial rates. There may be more than 100 000 missed cerebrovascular events each year in the United States alone3,8. The failure to recognize strokes in the ED is a missed opportunity for acute intervention and for a prompt initiation of secondary prevention therapy, increasing the risk of mortality and morbidity 1, 9-11.
Previous reports, mainly in older patients, identified misdiagnosis rates ranging from a 4% to 64%8, 10-12. In a retrospective study of misdiagnosis of stroke in the ED, 465 patients were included with a mean age of 72 years. In this group 22% were misdiagnosed. Symptoms independently associated with diagnostic errors included nausea, vomiting, dizziness and a positive stroke history. Strokes in the posterior circulation were initially misdiagnosed more frequently (37%) when compared with (16%) the anterior circulation 9.
The main finding of our study is that 29% of young patients with IS were misdiagnosed in the ED. Moreover, in a recent meta-analysis of 23 studies that evaluated misdiagnosis of cerebrovascular events, stroke misdiagnosis was more frequent in younger patients and when symptoms were mild nonspecific or transient (range 24%-60%). Youth increases stroke misdiagnosis seven fold (patients 18-45 years vs. those > 75 years )8. Older age was associated with decreased odds of missed stroke diagnosis: odds for other age groups compared to age 18-44 were: 45-64: OR 0.43; 65-74: OR 0.28; > 75: OR 0.19 (all p < 0.001)13.
Stroke is less frequently suspected in the young due to the lack of cardiovascular risk factors and more diverse etiologies3. Nevertheless, recent studies have emphasized that cardiovascular risk factors are common findings even in young adults with IS11, 14. Similarly, two-thirds of our patients presented at least one risk factor.
The majority of our diagnostic errors occurred in females. It has been previously reported that women with stroke suffer more delays than men in the ED because symptoms such as sensory disturbances, dizziness and headache are frequently interpreted as psychosomatic 8, 9, 15.

Three reasons were associated with errors in our study: stroke affecting posterior circulation; a clinical presentation with non-specific symptoms, including headache, nausea and vertigo; and the lack of identification of neurologic signs such as Horner’s syndrome, ataxia or nystagmus that might have alerted to the correct diagnosis.
The most typical localizing manifestations to consider stroke include crossed motor sensory deficits, oculomotor nerve palsies and visual field deficits 16. These were found in 44 (80%) of our patients with an accurate diagnosis, and only in 7 (30%) with misdiagnosis. Moreover, in both our own and previous series, these signs were present in less than 20% of patients with posterior circulation stroke 16.
The most frequent clinical presentation of our group with diagnostic error included headache, nausea, vomiting and vertigo, which are non-specific and may lead to misdiagnosis 8, 9, 15, 16. These are usually associated with a very low NIHSS score. In our study, 3 out of 5 misdiagnosed with an NIHSS score of 0 presented unrecognized truncal ataxia and Horner’s syndrome17. Headache could be confused in young adult stroke patients with migraine 8. In our group with errors, arterial dissection was the most frequent etiology; headache and neck pain were the principal symptoms 15, with 9 of these patients presenting partial Horner’s syndrome in the examination. 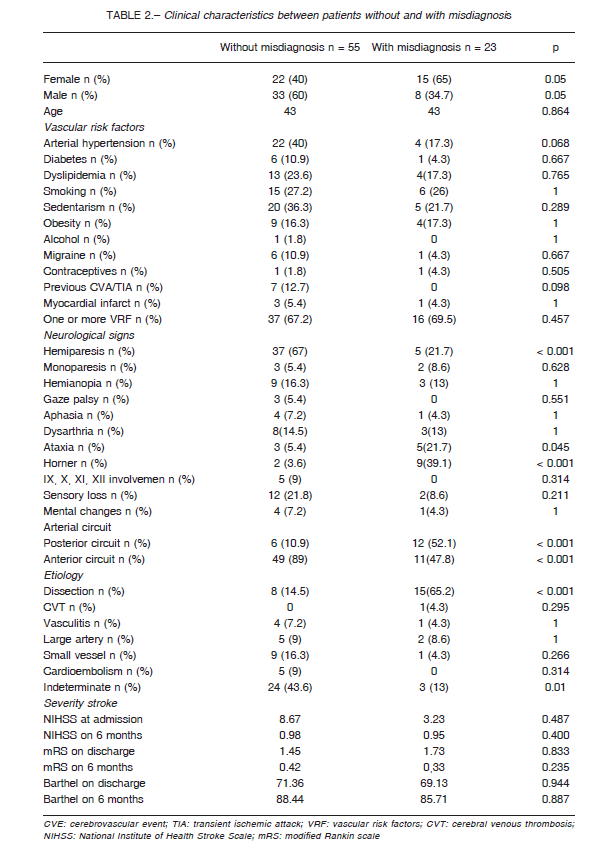 Cerebellar infarct simulating peripheral vertigo was misdiagnosed in 4 patients. These strokes are frequently missed in the acute setting5. A better training of HINTS evaluation in the ED may reduce the number of errors even in the presence of a normal initial MRI 18-21.
ED doctors initially saw 22 patients with diagnostic errors. The ED is a high-risk site for preventable errors, especially neurological conditions 8. Studies report that early evaluation by a neurologist in the ED could reduce the rate of misdiagnosis 2, 9.
Limitations of our study include the retrospective nature of the investigation and the relatively small number of young patients with IS, as well as the identification of missed strokes only among those finally admitted. We have no information to indicate whether there were additional patients with missed strokes discharged from ED. The scores reported correspond to the results obtained by the neurologist after admission.
In conclusion, misdiagnosis of IS occurred in a third of young patients consulting at the ED. Errors occur more frequently in those with posterior circulation infarcts presenting with symptoms such as headache, nausea and dizziness. We think that improving the identification of these non-specific symptoms and neurological signs like ataxia and Horner’s syndrome could reduce the rate of mistaken diagnosis especially in young.