The black swan image in medicine

In the last years, the metaphor “black swan” became very common in the public’s imagination to describe something unthinkable or extremely unlikely like a lightning in a blue sky; a single observation that collapses an idea or an interpretation of an endemic problem that has been taken for granted throughout human history. Although the adopted name is not appropriate because nowadays Cygnus atratus is a quite common species, the phrase is now part of the everyday language. Black swans occur in financial, social, and natural systems and, although they have predominantly negative connotations, occasionally they achieve a positive outcome such a strike of extreme good fortune. Even more, they may be desired, as many might be expecting the finding of a black swan having great consequences in medicine after completion of the Human Genome Project. Our aims are to explore the origin of this metaphor in the medical literature and to analyze a few examples of these events. 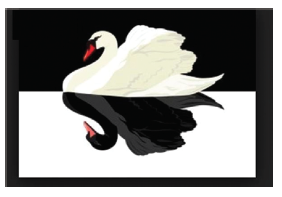 The relationship between a medical condition and a black swan was evidenced in a novel by Thomas Mann, “The black swan” published in 19541; although Mann does not relate the title to the story, its meaning is clear, a rara avis which manifests itself in the tragic story of a postmenopausal woman who notices signs of rejuvenation. What the heroin takes to be menstruation is a hormonal effect of an estrogen-producing tumor of the ovary, to which she rapidly succumbs. In the medical literature, J. Mulder employed it to describe the advantage of using a diazepam-fentanyl combination in anesthesiology2. The paper was published in 1970 in Dutch with an English abstract at the end of the text that was omitted in MEDLINE. Later on, in 1987, in an editorial of the British Journal of Rheumatology, Nigel Harris gave a complete detail of this phrase3. After a suggestion by an unidentified assistant to one of his conferences, Nigel Harris named black swan syndrome the antiphospholipid syndrome. It may very well be that the use of the phrase goes back to another article that we are missing or is not listed in the MEDLINE library and we leave open the question on which study was the first. The disputed priority, in sayings as well as in science, has also been addressed in the classical book by Robert Merton4.

Viewed from the clinical perspective, some discoveries and events, like the adverse effects of therapeutic drugs or the emergence of an epidemic, could be catalogued as black swans. We present a few examples taken from different areas for clarifying the use of the metaphor. By mid-December 2014 there was an outbreak of Ebola virus disease in West Africa with 6000 people dead by the end of that year. It seemed to be an inevitable consequence the authorities could not possibly foresee, and yet, the organization Physicians Without Borders had expressed its concern on the issue eight months before the outbreak5. In the area of kidney physiopathology, Nath6 considered a black swan the discovery that CO, when added in minute concentrations to organ preservation solutions, reduces donor-kidney injury that occurs after cold storage and improves the survival of the recipient7. As it is well known, CO possesses a high affinity for the hemo group which may markedly impair the function of hemo proteins. This property should be lethal but – here lies the clever hypothesis – oxidative stress of cytochrome P450 has a critical role in renal injury and the combination of this hemo protein with CO prevents its degradation, thus ameliorating the renal injury. For this reason CO turns out to be well suited. Thus, CO in decreasing concentrations is transformed from a toxicant into a protectant. Another black swan phenomenon was labelled after demographic data, showing an increment in the number of centenarians and supercentenarians, being these latter individuals who had reached 110 years of age with prevalences of 0.3-0.5 % of the centenarians8. Much of the improvement in the life expectancy is the result of lower rates of child mortality but something else occurs: these exceptionally old persons retard in some way the pathological conditions determining the aging process and challenge the accepted opinions about the human mortality curve. Although there is a debate on whether the maximum lifespan of humans is fixed or not9, in France, Japan and Italy life expectancy rates show a rise of about two years per decade. Just in Italy, the number of centenarians increased almost two orders of magnitude from 1921 to 19958, with enormous social, economic, and public health impacts10. There are other black swans phenomena published such as the adverse effects of antitumoral drugs in unrelated tissues11 or the lethal pulmonary embolism in traumatized patients at risk of deep vein thrombosis12.

In his book “The black swan”13, Nassim N. Taleb provides his view that it is impossible to estimate the risk of occurrence of those highly influential events by their effects. They are neither predicted nor anticipated. They are understood retrospectively and it is only post factum that a clear basis is found for their occurrence in financial, social and natural systems, a justification alleviating their randomness. This definition is crucial for his general hypothesis: the black swan is an event whose occurrence we can ascribe to known reasons, but only after it has occurred. In other words, the event is rationalized by hindsight, as if it had been expected. In many publications the missing component for declaring a black swan event is the lack of retrospective interpretation, thus, under this definition they are not black swan but just unusual cases, rarae aves.

On the other hand, we should not be surprised by the unexpected events that provide conceptual changes to what has been established by the expected ones. It is inherent to science that hypotheses and beliefs are constantly broken and a blind confidence in assertions based on statistics is pernicious for the advancement of knowledge. Finally, the alertness on the eventual occurrence of these unexpected events is an important component of educational process because their identification depends on the experience, perspective and beliefs of the witnesses14. Thus, academic curricula should incorporate training on these black swans to mitigate possible undesirable effects and transform them into “near-black swans” or “gray swans” to make them predictable and even preventable.

4. Merton RK. On the shoulders of giants. Chicago: The University of Chicago Press, 1993.