mortality in this population. The purpose of this study is to compare HIV-infected patients on antiretroviral therapy (ART) and ART-naïve HIV-infected patients regarding arterial elasticity. From September 2010 to September 2015, 105 HIV-infected subjects were enrolled, 41 ART-naïve and 64 on ART with stable viral suppression. Elasticity of large and small arteries (LAE and SAE) was assessed by analysis of radial pulse waveforms using a calibrated device. A single set of measurements was performed. Multivariate linear regression models were constructed to estimate independent correlates of arterial elasticity. On-ART and ART-naïve patients were similar with respect to gender, age, body mass index, Framingham cardiovascular risk score, smoking habits, and CD4+ counts. Median time on treatment was 60 months and 79% of patients were on regimens based on non-nucleoside reverse-transcriptase inhibitors. No significant differences in LAE and SAE assessments were found between groups. However, time on ART and cholesterol levels were independently associated with LAE impairment. No association between arterial elasticity and CD4+ counts was found. We conclude that cumulative exposure to ART may play a role on LAE impairment and deserves further investigation.

The prevalence of cardiovascular disease has increased in HIV-infected patients and represents a major cause of morbidity and mortality in this population1. This rise in cardiovascular risk has been attributed to metabolic changes related to antiretroviral therapy (ART) exposure2, a higher prevalence of the traditional risk factors for atherosclerosis3, 4, and the effects of HIV infection itself5. ART interruption has also been associated with a higher cardiovascular risk as compared with continuous therapy6.

Data from previous studies have indicated increased arterial stiffness in patients with uncontrolled infection as compared with age matched HIV negative controls7, 8. Furthermore, several studies have linked prolonged exposure to ART with greater stiffness9-11, whereas others have demonstrated improvements in endothelial function in patients after starting treatment12.

This study aims to assess the elasticity of large and small arteries in ART-naïve and ART-treated HIV-infected patients, and to examine the association of cumulative exposure to ART with impaired arterial elasticity.

were asked to participate if they were receiving effective ART (defined as HIV RNA levels of < 50 copies/ml for at least 12 months), or if they were ART-naïve (defined as never having received previously any type of antiretroviral therapy, including mother to child prophylaxis) with CD4 cell counts > 350 cell/mm3. Subjects with known cardiovascular disease were excluded as were pregnant women and patients with active bacterial infections or systemic vasculitis, as these conditions may affect measurements.

All participants provided informed consent prior to this study, which was approved by the Ethics Research Committee of the Hospital J M Ramos Mejia.

Patients attended a single visit in which they were administered a structured questionnaire, an electrocardiogram, the arterial elasticity assessment and a peripheral blood draw. The structured questionnaire included topics such as demographic characteristics, smoking habits, use of illicit drugs, history of diabetes mellitus or arterial hypertension and concomitant medications. Medical records were reviewed for detailed data regarding time from HIV diagnosis, type and duration of ART, hepatitis C status, current and nadir CD4+ lymphocyte cell counts and HIV-RNA levels. Total cholesterol and triglycerides were measured using standardized methods at the central laboratory of the hospital after fasting for a minimum of 8 hours. Body Mass Index was calculated as weight (in kilograms) per height (in square meters). Hypertension was defined as a systolic blood pressure ≥ 140 mmHg or a diastolic blood pressure ≥ 90 mmHg or the use of antihypertensive drugs.

Elasticity of large and small arteries (LAE and SAE, respectively) were derived from the radial diastolic pulse waveform analysis using a calibrated device model CR-2000 (Vascular Profiler Hypertension Diagnostics Inc., Eagan, MN). Radial pulse waveform analysis is a non-invasive technique based on the Windkessel model13 that provides information regarding elasticity of large (aorta and conduit arteries) as well as small arteries (peripheral branches and microvascular components). Its rationale and procedures have been previously described, and this technique has been widely used in large cardiovascular cohorts14-16.

Subjects were examined in supine position after resting for at least 10 minutes in a quiet room. A tonometer sensor was placed at the dominant wrist over the radial artery in order to record the pulse contour. Once a stable 30-second measurement of the radial pulse waveform was achieved, an analog tracing was digitized at 200 samples per second, excluding the dicrotic notch, and stored in a personal computer system. During the arterial elasticity assessment, an automated blood pressure measurement was performed on the contralateral arm.

The pulse waveform has two peaks within the diastolic curve: the first reproduces the capacitance of the proximal aorta, and the second represents the oscillatory wave of the elasticity in smaller arteries. The device brings the information of the LAE (expressed in ml/mmHg . 10) and SAE (in ml/mmHg . 100) for each measurement performed. For analysis, we used the average of three consecutive measurements made for each patient separated by a 10-minute period. Caffeine ingestion and cigarette smoking were not allowed within 8 hours of examination.

All measurements were performed by a trained investigator who was unaware of the patients’ clinical data.

Descriptive statistics are reported as means ± SDs or medians with interquartile range for continuous data (IQR) or percentage for categorical variables. Univariate linear regression examined the degree of association between LAE, SAE and either clinical or HIV-related variables. A multivariate model was constructed including all the variables that had a p value < 0.05 in the univariate linear regression or were considered relevant according to previous data. All analyses were performed using SPSS 20.0 statistical software.

Demographic and clinical characteristics of the 105 participants are presented in Table 1. Overall, 68.5% of the patients were male, with a mean age of 35 years and a median time of 6 years from HIV diagnosis. Both the ART (n: 64) and ART-naïve groups (n: 41) were similar with respect to sex, age, body mass index, smoking habits, triglycerides, Framingham risk score, hepatitis C status, hypertension history, and CD4+ counts at the time of the study. A higher proportion of patients in the naïve group were men who have sex with men (61% vs. 34%), and as expected, the ART group had a significantly lower CD4+ cell count nadir and a longer time from HIV diagnosis.

Median HIV RNA for the ART-naïve patients was 26 419 copies/ml.

One diabetic patient was part of the ART-naïve group. Two and three patients in the ART and ART-naïve groups, respectively, were taking antihypertensive medications (4 patients with a regimen of enalapril, and 1 patient with amlodipine). None of the patients used lipid-lowering drugs.

Two patients (one from each group) were coinfected with HCV.

When assessing factors associated with LAE and SAE among the entire study population (Table 2), older age and male sex were associated with changes in SAE, but only male sex remained as a significant predictor in multivariate regression.

On the other hand, LAE exhibited a significant inverse relationship with total and low density lipoprotein cholesterol levels, years since HIV diagnosis and time on ART. 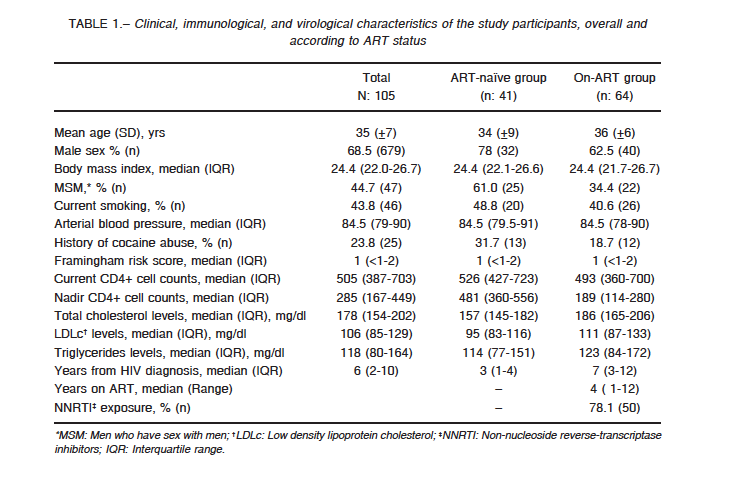 We did not observe significant differences between arterial elasticity and current or nadir CD4+ counts.

In this study, we found no differences in LAE and SAE between ART-naïve patients and well-controlled HIV subjects receiving ART. However, cumulative exposure to ART appeared to be associated to the impairment of large arterial elasticity in a cohort of patients mainly exposed to a non-nucleoside reverse-transcriptase inhibitor (efavirenz).

It should be noted, however, that the median time from HIV diagnosis in the START arterial elasticity sub-study was 1.3 years compared to 6 years in our study. Furthermore, in START, median time on ART was 30 and 7 months in the early and deferred groups respectively. Patients in our study were exposed longer to ART, with a median of 60 months and a maximum reaching 108 months. Our results are consistent with results of previous studies suggesting association of an increased arterial stiffness with a longer duration of ART. Indeed, in an investigation conducted by Sevastianova et al9, duration of antiretroviral therapy (p: 0.046), cumulative exposure to nucleoside reverse transcriptase inhibitors (p: 0.032), and protease inhibitors (p: 0.011) were identified as independent factors predicting the heart rate corrected augmentation index. In the study by Schillacchi et al10, cumulative duration of treatment was a predictor of aortic pulse wave velocity, each 5 years of treatment duration being independently related to a 1.35 m × s−1 increase in pulse wave velocity. Carotid intima-media thickness, arterial stiffness and other markers of endothelial function were compared in a study by van Vonderen et al18 involving 37 treatment-naïve men following the initiation of two different ART regimens. Carotid intima-media thickness and femoral arterial stiffness increased after 24 months of ART, whereas serum markers of endothelial function improved regardless of the ART composition.

Furthermore, in our study, patients had initiated ART at a lower CD4+ nadir than those in the START arterial elasticity sub-study. In previous reports, initiation of antiretroviral therapy at higher nadir CD4+ T-cell counts was associated with reduced arterial stiffness in HIV-infected patients19, 20. However, other studies failed to demonstrate this association21. 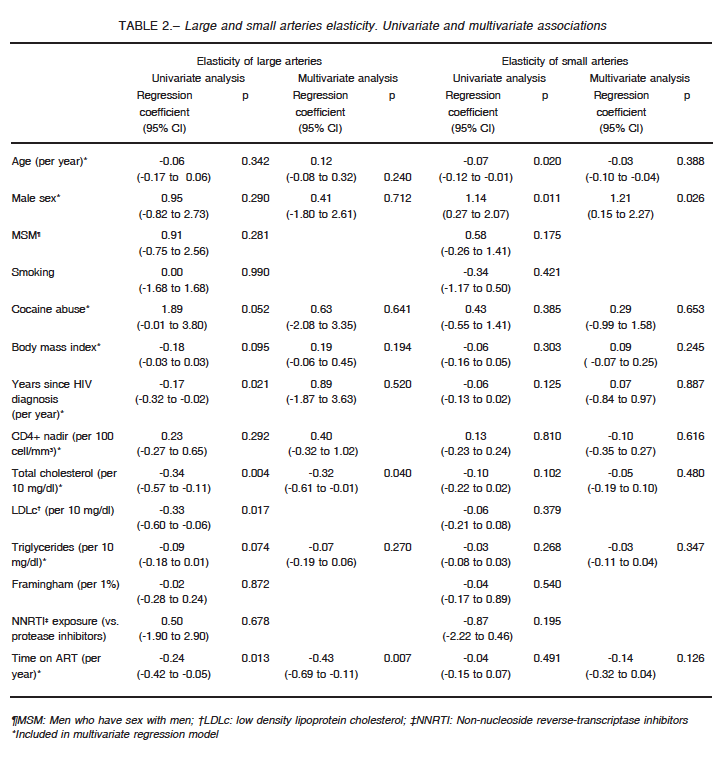 Previous works focused on the effects of HIV infection itself on arterial walls reported worsening arterial elasticity, based on comparisons of HIV-infected patients with non-infected subjects. In a cross sectional study using pulse waveform analysis to compare 32 ART-naïve subjects with 30 HIV-negative controls, HIV infection was associated with the impairment of both LAE and SAE, even after adjusting for traditional cardiovascular risk factors8. In another cross sectional study22 that compared arterial elasticity via pulse wave velocity in 174 HIV-infected patients and 80 healthy controls, virologically suppressed patients showed similar arterial elasticity to non infected subjects. More recently, Leite et al23 reviewed clinical studies published between 2009-2016 in adult populations to summarize some of the current evidence concerning the association between HIV infection and aortic stiffness. All the 18 studies included compared HIV infected and uninfected patients. They found discordant results regarding whether HIV–positive patients had increased aortic stiffness compared with HIV-negative controls; the main determinants of aortic stiffness reported in these series were associated to traditional cardiovascular risk factors such as age, blood pressure, smoking and metabolic syndrome. On the other hand, some HIV-related variables –including CD4/CD8 ratio, current or nadir T-CD4 cell counts < 200/mm3– were also associated to an increase in aortic stiffness.

In our study, most patients were on efavirenz. Efavirenz use has previously been not only associated to increase arterial stiffness but also to elevate markers of atherosclerosis24.

While considering small arteries, female sex was associated to decreased elasticity, in line with other reports25 while advancing age did not reach level of significance in our multivariate analysis.

There are several limitations to our study. Its cross-sectional design does not allow for the establishment of causality when examining relationships between arterial elasticity and predictor variables. It is worth noting that we were able to enroll naïve patients with a long time from HIV diagnosis because we started this study before the launching of the 2015 WHO guidelines26 recommending that ART should be initiated in everyone living with HIV, independently of the CD4+ cell counts. On the other hand, it includes heavily treated patients with a long time since HIV diagnosis.

Our finding demonstrating an association between cumulative exposure to ART and decreased LAE is intriguing and deserves further investigation.

Acknowledgements: The authors would like to thank to all the participants in this research and to members of the HIV Unit team for their support.

26. Guidelines on when to start ARV for HIV. World Health Organization. 2015. In: http://www.who.int/hiv/pub/guidelines/earlyrelease-arv/en; accessed July 2017.